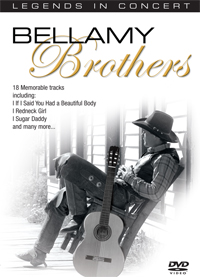 Although the Bellamy Brothers are the most successful duo in country music history, they have never been favored by the critics. That doesn’t mean their music was routine, by-the-book and formula country-pop. More than most acts of the late ‘70s and ‘80s, the Bellamys pushed the borders of country music, adding strong elements of rock, reggae, and even rap. Nearly a decade after their first hit – the 1975 pop chart-topping, Southern rock-tinged “Let Your Love Flow” – the brothers had made a stack of best-selling records, and critical respect came by the late ‘80s. By that time, they had firmly established themselves as the top duo of the ‘80s, both in terms of popularity and musical diversity.