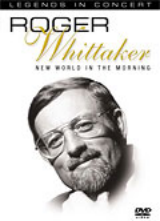 This DVD shows the inimitable Roger Whittaker in a live 80s performance singing a selection of the songs that helped to catapult him to a position of world prominence. Born in Nairobi, Kenya from English parents Roger Whittaker has entertained the world with his velvet smooth voice since he took his first steps into the limelight in 1962 despite gaining a B.S. in zoology, biochemistry and marine biology. His break came with a demo tape he had made whilst at Bangor University which attracted the attention of a major music publisher. Realising the potential of Whittaker's voice he arranged for him to cut his first single, quickly followed by a second, which happily, attracted the attention of several radio stations with the consequence that 'Steel Men' became his first hit in the British charts. Roger was on his way!