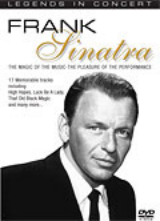 Francis Albert Sinatra was born in the month of December 1915 to Italian immigrants in the town of Hoboken. Scarcely could there be more ordinary beginnings for a man that was later to become an entertainer the world would find it difficult, if not impossible, to replace. In this DVD we present a 45 minute selection of his finest songs, written by some of the world's most influential songwriters, including such hits as 'High Hopes' and 'Old Man River' all drawn from television appearances spanning his heyday period from the 40s to the 50s.