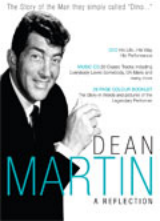 This collector's set gives a detailed insight into the life of one of the most talented performers of his time, a man admired and at ease in the company of both men and women. From his childhood in Ohio, to his time as part of a highly successful comedy duo with Jerry Lewis, to the heady days as a star performer with his own television show, and not forgetting the sensational period spent in Las Vegas as Second-in-Command of the notorious Rat Pack, his outstanding talent as an all-round entertainer is showcased here on DVD, Music CD and in a 28 page colour booklet. To his many devoted fans Dean Martin's voice and style, with his trademark highball glass in his hand, is instantly recognisable. Although his stage persona was one of a cool and consummate artiste, in truth he could never quite understand what all the fuss was about and regarded his celebrity status with complete indifference; Dino didn't seek fame, fame sought him. From his signature tune 'Everybody Loves Somebody' to one of his biggest hits 'That's Amore' and many, many more spellbinding songs, Dino will be remembered long after his passing on Christmas Day 1995.