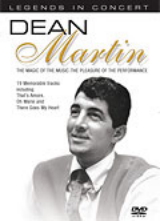 Dean Martin, the undisputed king of 'schmooz' is presented here performing a fabulous collection of all time favourites whilst entertaining his millions of devoted fans in his hit television show, a show that was to top viewing charts for nine years. To his many devotees his style is unmistakable, his voice memorable, but in reality Dino didn't so much seek fame as fame just latched on to him. Although his stage persona was one of the cool and consummate performer, in truth he could never quite understand what all the fuss was about and took his fame with complete indifference.