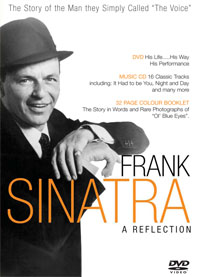 Many people consider Frank Sinatra to be the most important figure in popular music in the 20th century. In a career spanning sixty years he demonstrated a remarkable ability to maintain his appeal and achieve his musical goals despite often going against current musical trends. He came to the fore in the swing era of the thirties, delivering his first number one hit in 1940 and remarkably still enjoying million selling albums as late as 1994. Sinatra known as "The Voice" in his early days and "Ol’ Blue Eyes" in his latter years, passed away in 1998 leaving a legacy of close to one hundred albums and sixty films. This collector’s set tells the story and showcases the charisma and talent that was Frank Sinatra including 17 great filmed performances and 16 audio tracks. Accompanying the collection is a fully illustrated booklet highlighting the life and loves of the man as well as a complete filmography and discography.