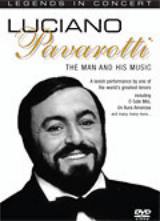 On 12 October 1935 in Modena, Italy Luciano Pavarotti, a legend in the making,was born.The son of a baker and amateur tenor, singing was clearly in his blood, but it was football that first brought him into the limelight when he showed considerable talent playing for his local club. But soccer was to be a lasting passion rather than a direction in life, and a passion he still follows with undimmed enthusiasm. His baptism into the world of music came about when performing with his father in the Modena Chorus, winning first prize in an international competition. This produced a spark bright enough to ignite a flame in his heart that was, and still is, filling every auditorium in which he appears.