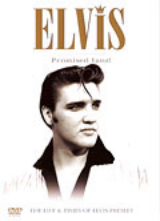 "Promised Land," takes an in-depth look at the boy and the man who was born to be a legend. It was as a teenager that the Elvis bandwagon began to roll, although the passage of time proved to be rockier than anticipated. Together, with rare unseen footage we chart his progress from his poor beginnings, through his teenage years, to the eventual meteoric rise of a star. Here you can see the events unfold in his life, which were to color and shape his career, including his call up and the later battle with his weight to the sudden and unbelievable end of the rock 'n' roll legend.